Yesterday - before I headed off to the gym - I thought I would quickly swing by the book shop to pick up the latest autobiography of Seb Coe. Normally I would just order this hassle free via Amazon or Bol.com and patiently wait a couple of days until it arrives in my postbox.

But this time I really wanted immediate satisfaction – I was giving a lecture on Strategic Management and competitive Advantage on Thursday -  and I thought there would be some good stories in the book that I could use as examples in the class.

My first port of call was Selexys Scheltema book store in the center of town, I was first told that the book was on the first floor to the right. After searching and asking staff I left empty handed, it appears they had never had it in stock [despite the book being out months, and already in soft back].

Second port of call the American book, store same story, they haven’t stocked it. It was getting annoying, this was supposed to be a 5 minute errand to pick up a popular book.

Third port of call the English book store. The man at the desk pointed me in the direction of the biography section – I hunted high and low – without luck. Back to the front desk, only to hear “oh that book is in the sports section not biography”. Finally one hour and 15 minutes later I emerge from my third book store with my book.

Talk about “not quick satisfaction”! On a positive note, it meant I had another great excuse for keeping my workout at the gym short.

Don’t book stores realize that in order to compete with online book stores, they need to think about how they compete and do some things better? Perhaps stocking books that are very topical – we just had a Olympics right? And perhaps knowing where books are in their store so they can advise people accurately the first time? Or having a computer system that can accurately identify if the book is in the store.

It seems that physical book stores are actually only really for browsing on a rainy day, when you have time on your hands and no real aim or idea what book you want to buy – bad news for the book store owner, once the rain has stopped, many of these people leave empty handed after having fingered all the books and having read half of the content of the shelf.

I question whether these retailers can still compete with online book stores.
Posted by Claire I Powell at 06:22 11 comments:

Check out this measurement benchmarking tool from Forrester Research. Although I am more a fan of taking baseline readings and tracking progress over time, this is a handy little tool for companies to understand what elements of their strategy they can benchmark as opposed to tracking baseline.

This is how Forrester describes their tool:

Forrester’s free benchmarking tool that can help you compare your company’s interactive marketing budget and organization against your peers’. Simply answer a few questions and our tool will compare your answers with similarly sized companies against five metrics:
When I was interim Marketing Director for Forrester's Marketing and strategy Business Unit over a year ago, one of the changes I proposed was this tool for 3 reasons: 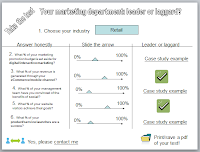 This was my rough proposal at the time. I am glad to see the final thing looks much better than my rough version, but hey I am no designer.

From the perspective of Forrester, the question is, does this little tool also generate quality leads for the sales force to follow up on, or for marketing to nurture into the sales pipeline?

Last week I went off to the SportNext Live Session at the SportCafe in the Dudok Arena in Hilversum. The session was interesting, but the chatting with other attendees was the most enlightening as always!

The event included a number of interesting speakers and round table sessions. The theme of the event was about new sports and their positioning, however sometimes the sessions went off topic! Additionally there were clinics for the following new sports:


My achilles tendonitis was playing up, so I couldn't take part unfortunately, but the bossaball was  definately the most fun to watch from the sideline! Wilco Nijland the MD of Bossaball Holland was there and even did a demo of the smashing in mid-air after jumping on the trampoline part of the blow-up field. The two words that the top 3 new sports in the list have in common, are "fun and quick-results." It is not like you have to wait long for a point to be scored!! Which can't be said of squash, but I love that sport! [See my ISMB students video promoting squash as part of the Olympics 2020! Shameless plug!]

A number of associations, including KNHB [Dutch hockey association] and KNGU [Dutch gymnastics association] are creating junior or senior versions of their sports. For example Funkey hockey for juniors or Fithockey for seniors or Acro Maatje gymnastics for young children. These are ways to speak to different target segments from their traditional audiences and act as a way of promotion and funneling new members into the traditional system.

You would have thought that the associations would jump at this chance to either assume the new sport into their world, or invest in it as a side venture, or take it over, or create a strategic partnership for a win:win. It is not like traditional sports associations are not struggling to attract new members and keep afloat at the moment - is it? Of course it is more difficult for those new sports that cross over into multiple combinations of sports or require huge logistical investments like Bossaball.

The UK Football association is a good example of a traditional sport not willing to change and introduce new versions - for fear of damaging the "beautiful" game, that was until recently when the FA decided to change the game for youth players to make the teams smaller, pitches smaller to match the age range, goals smaller and a move away from "win at all cost" attitude.

My background is badminton, I played for a French club and number 1 in my county and beat the number 1 in England once!!  I have to admit when I see speedminton I cringe!! So I am one to comment on "don't change the beautiful game". But let's face it, sports should be doing anything they can to commercialize, attract new target audiences and keep their members even if it is with a different version of the sport, or just for the sponsors.

With my International Sports Management Students [ISMB] - during one of our badminton lessons, the students were given the assignment to create a new version of badminton for young players. It was a fun lesson for all involved.