Web Firms to Adopt 'No Track' Button - it relies on the tracking Web sites to play nice! 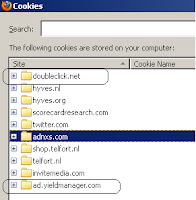 At the end of February 2012, a coalition of Internet giants including Google Inc. agreed to support a do-not-track button to be embedded in most Web browsers—a move that the industry had been resisting for more than a year.

It all sounds good in theory ...  but it takes agreement from the tracking companies to honour the users choice, for this to work. Because despite opt-ing out of tracking in my Mozilla Firefox browser, 100's of ad tracking cookies are dropped onto my computer everyday. See screen shot.

Since Firefox launched their "Tell websites I do not want to be tracked" in 2011, only 1% of users have adopted this and those that have, like myself have not seen much difference in tracking. Mainly because "No major ad networks are doing anything to respond to Do Not Track at this point, but some of them are monitoring how many times the DNT signal is hitting their ad server". Google even finally admitted that they had been bypassing the privacy setting and the choices of millions of consumers. 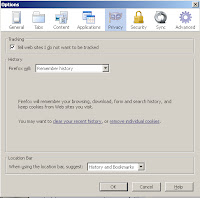 No wonder that so few people have adopted "do not track" options in browsers like Mozilla to date. Added to that, the option is hidden in the tools > options > privacy setting in the browser. This is not what is meant by "transparency" - this feels like a "we offered it, but see, no one was interested" exercise.

So it may sound strange - a marketer focused on measuring and getting an ROI - in support of consumers choice and urging companies to be more transparent and educating users as to what tracking is done and why. But being transparent means that you can focus on quality and not quantity- building trust. It also enables you to identify the real loyal customers that need to be focused on and measure the impact you are having on those that really count.

This is a great video on explaining tracking cookies: